The good and the bad in the outlook for consumer spending 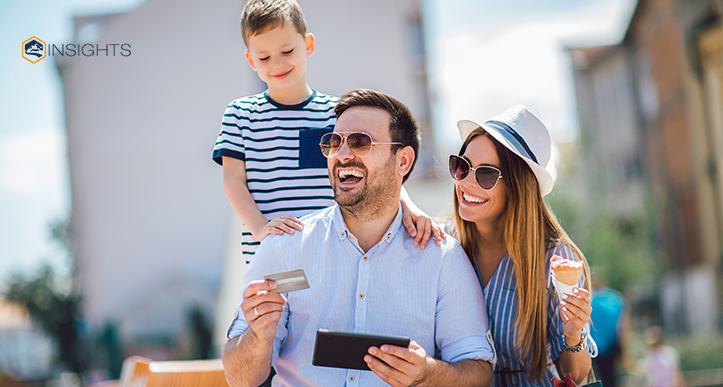 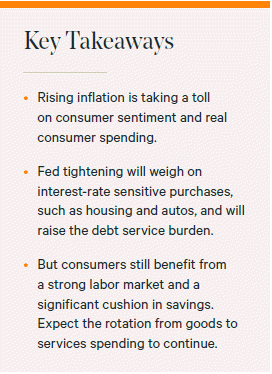 With personal consumption expenditures (PCE) accounting for nearly 70% of real GDP, the economy usually goes where the consumers take it. And lately consumers have been souring on the economic outlook amid surging inflation, the end of fiscal stimulus last
year, Fed tightening this year, and increased
uncertainty about a potential impact from the
Russia-Ukraine war. Surely, all of these factors will curb consumer demand.

But on the flip side, payrolls continue to grow at a healthy pace, households still have a lot of excess savings, and their debt burden is low. As a result, we expect real consumer spending growth to moderate this year to about half its pace of last year, but not drag the economy into a recession.

There is a negative correlation between inflation and real PCE growth. It is true for an individual good or service – when the price of something goes up, quantity demanded for it usually goes down, given a budget constraint. It is also true in the aggregate – when inflation goes up too much, it may destroy demand.

This hasn’t been a major concern since the mid-1980s, as inflation has been mostly stable and contained. But with the significant runup in inflation over the past year, currently exceeding the rise in wages and disposable personal income, consumers may start to balk at some purchases, particularly goods.

Given that the negative price-quantity relationship is stronger for goods than for services, we expect the runup in goods prices to curb some of the goods’ demand, which should subsequently alleviate some of the price pressures. But the main point here is that surging inflation has a negative impact on real consumer spending, and ultimately real economic growth.

Consumers are worried about inflation over the next 12 months, with the New York Fed’s 1-year inflation expectation measure registering 6.6% in March, a record since data started in 2013.

Although the 3-year inflation outlook is more moderate at 3.7% and has rolled over from
a recent peak, it nonetheless suggests that consumers do not expect inflation to return to its pre-pandemic level any time soon. This has weighed heavily on consumer sentiment, which last month hit its lowest level since August 2011.

Repeatedly, the Reuters/University of Michigan Survey has pointed out that rising inflation has depressed consumers the most, as many have been worried about a persistent decline in their real incomes, a worsening financial position, and sliding purchasing power.

The steep decline in sentiment has historically been associated with slower economic growth, as indicated by the slowdown signal on the chart below.

Separately, the Conference Board’s Consumer Confidence Index remains more upbeat, as it hasn’t yet fallen below its pandemic low. But consumer expectations in that survey have also soured, dropping in March to their lowest level since February 2014. 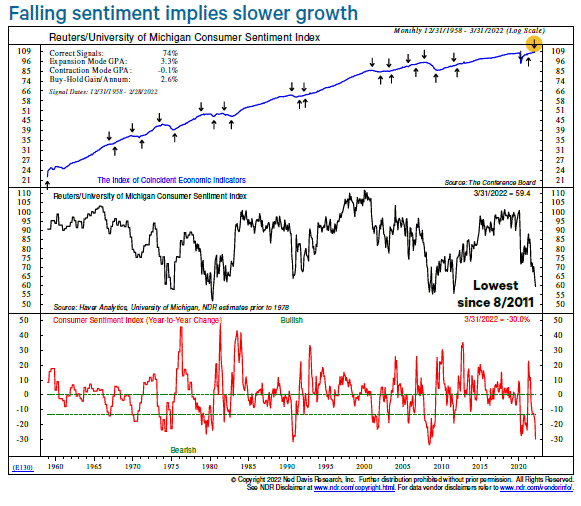 To curb inflation, the Fed needs to slow aggregate demand, including consumer spending. Some consumer purchases are more interest-rate sensitive than others. The chart below shows that existing home sales typically peak at the onset of a tightening cycle, decline an average of 5.6% in the following 12 months, and another 3.1% in the year after that. As a result, housing-related purchases such as appliances, furniture, and other big-ticket items also pull back as interest rates rise.

In the current cycle, mortgage rates have already spiked nearly 100 basis points from their lows last year to over 4.7%, the highest level since 2018, signaling a cool down in housing demand in the coming months. 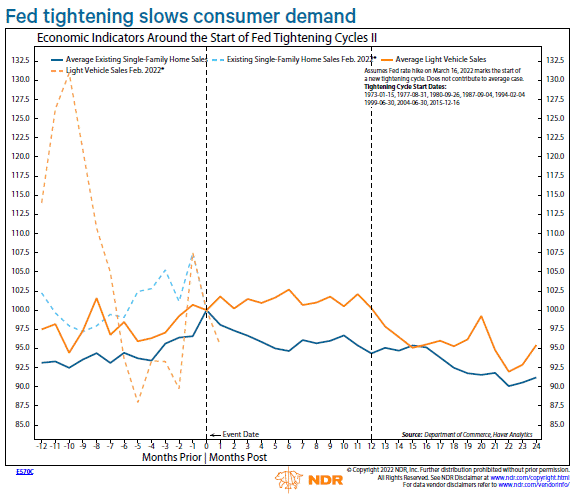 Vehicle sales have been stable in the first year after the start of Fed tightening and have declined an average of 4.9% in the second year. While this market remains woefully undersupplied because of semiconductor and other component shortages, rising interest rates will also likely bring down demand.

Separately, higher interest rates should encourage more saving and less spending out of disposable income, effectively slowing the pace of the expansion. The chart below shows that historically there has been a modest positive correlation (0.16) between real long-term interest rates and the personal saving rate. So, as Fed tightening moves the real interest rate closer to
positive territory, it should incentivize more saving. 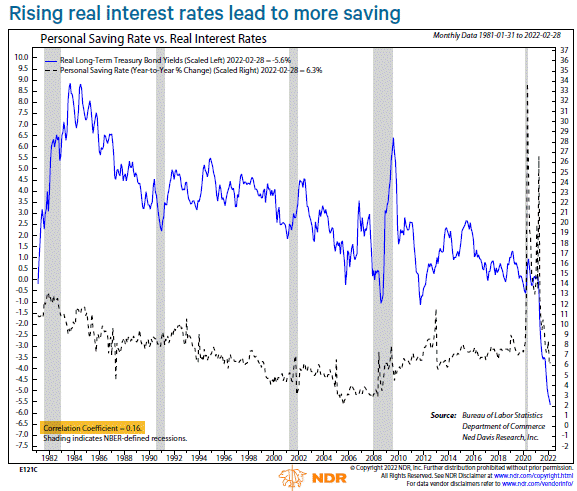 While higher inflation, falling sentiment, and rising interest rates will slow consumer spending growth, there are several positive factors that argue against an outright contraction. Prime among them is the continued growth in employment amid record high labor demand.

Nonfarm payrolls are still about 1.6 million short of their pre-recession high, but have been rising at a fast pace which implies a full recovery in the next several months. Since worker compensation accounts for the biggest share of personal income, as long as payrolls continue to grow, they will continue to be a positive driver for both income and spending growth. In March, nonfarm payrolls increased 4.5% y/y, near its fastest pace since 1984.

While consumer goods spending is already running well above its pre-recession peak, services spending is still behind. But with a large share of the population vaccinated and many of the Covid restrictions already lifted, we expect this pent-up demand for services to drive consumer spending going forward.

The steep rotation from services to goods spending during the pandemic that has just recently begun to revert. Along with supply chain issues, the pandemic shift in demand drove goods CPI inflation to double-digits. But a return to more services consumption versus goods should help alleviate inflation pressures.

Accumulated savings during the pandemic could have a smoothing effect on consumption.  Household demand deposits at the end of last year were at a record $4.1 trillion, up $2.8 trillion since Q1 2020. The jump reflects three rounds of fiscal stimulus related to the pandemic, but also the rebound in employment and wage growth.

As the personal saving rate has declined, so has the year-over-year growth rate in demand deposits. But the accumulated balance can nonetheless be a significant cushion for consumer spending going forward.

Consumer credit, which sank during the pandemic, has now rebounded. Revolving credit (mostly credit cards) spiked nearly 10% year-over-year in February, the fastest pace since December 2006. But the level is still more than 3% short of pre-pandemic, making it hard to argue that consumers are overleveraged.

Indeed, the household debt service ratio was at 9.3% in Q4 2021, still close to a record low.
While most of it reflects low mortgage debt service, it also shows consumer debt service (both revolving and nonrevolving) is lower than what it was pre-pandemic. We expect these measures of credit burden to pick up in the coming quarters, as interest rates rise and the moratorium on student loan payments ends in August, but to not be a significant drag on spending growth this year. 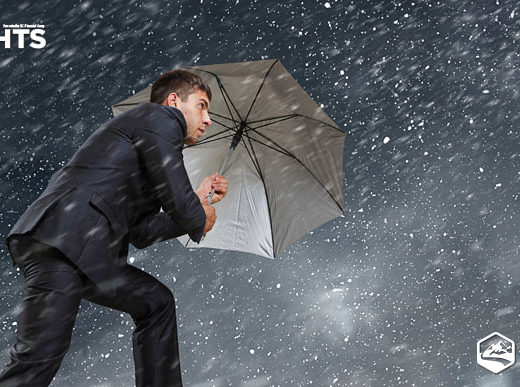 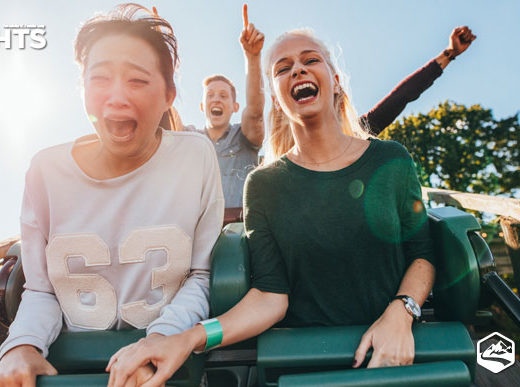 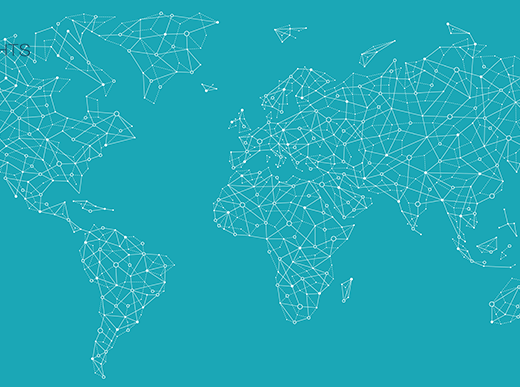